Walking the Dales Way, from Grassington to the Lake District

Day One: Arrival in Grassington

We woke to a lowering sky and intermittent showers, just as the two old codgers at The Friendly had predicted. By the time we arrived at our lodging, Bridge Edge Farm, just outside of Grassington, the rain was coming down steadily. Not a very auspicious start to a week of walking in the Yorkshire Dales.

Robyn, our landlord, greeted us with grave courtesy and only half concealed pride in his picture-perfect, 17th Century farmhouse on the banks of the River Wharfe. He reminded me of a very serious Friar Tuck with his wide girth, small round head, and dark fringe of bangs. But his hospitality was genuine, and our room with its low ceiling and wide beams, was wonderfully cozy. Lots of little china figurines, heavy chintz curtains, and puffy down comforters. 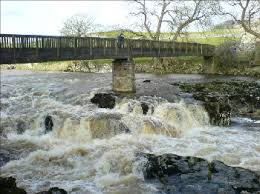 After tea and some delicious home-made scones served in the formal parlor, we changed into hiking pants, warm sweaters, rain jackets, and hats. We stuffed our ponchos and gloves into our backpacks, and set out for Linton Falls. It would be a good time to test our rain gear, and Robyn recommended a short walk,about a mile down stream, where we crossed the River Wharfe on a suspension bridge, just above an old mill.

According to our  pocket-sized map, which I had stored in a plastic envelope, the Dales Way, the footpath we would be following for the next seven days, ran parallel to the river, and coming down off the suspension bridge, we saw the path, barely visible in the high, wet grass. The Dales Way sign was a slab of weather-beaten wood, vaguely arrow-shaped, nailed to a post. This was our first sighting, and we realized Dales Way markers blended in so naturally with their surrounding they were going to be a real challenge, like finding clues in a scavenger hunt.

We  followed the path along the river till we reached the main road into Grassington, just across from Bridge End Farm. Grassington, is a village much smaller than Haworth, catering to bikers, and walkers, (in England the term hiker is seldom heard.) But not much was happening that afternoon. So, after visiting the Yorkshire Dales National Park Museum, and wandering around the village looking for a bank, we gave up, and decided to have a late lunch/early supper. None of the restaurants opened until 6:00, so we settled for a tea room that served soup and sandwiches. We were grateful for the warmth of the crowded little shop, and the cheerful fire. Most of the guests seemed like us, to be waiting for a break in the weather.

It was almost dark by the time we started back to Bridge End Farm, and the wind was howling. We hurried down the hill from town with the rain driving straight into our faces and crossed the River Wharfe on the main bridge, the water below frothing and darkly dangerous in the half-light. How were we going to walk the 8-10 miles we had planned for the next day?

Robyn greeted us at the door with the latest weather report. The temperature was 9’ centigrade, which meant somewhere in the 40’s, not counting the windchill. Tomorrow, Saturday, would be clear in the morning, with showers in the afternoon. It didn’t sound promising.

Wet, cold, and discouraged, we brought our boots and damp clothes down to the warming room next to the furnace in the basement. Many of the B&B’s we would be staying in advertised drying rooms and now I understood why. It was vital that all our gear, especially our boots, which were not waterproof as advertized, be dry by next morning.

After a hot shower, I felt better and snuggling under my down comforter, I started reading an introduction to the Yorkshire Dales that I had found in the lounge. It was hard to concentrate with wind blowing through the trees,  and rain hammering steadily at the windows. Eventually I fell into a dreamless sleep.

Lyndon is a writer and independent researcher. Her articles, poems, book reviews, and short stories have appeared in Friends Journal, Pendle Hill Publications, Quaker History, Poetry Ink 2013, Forge 2015, and Gemini Magazine. 2015
View all posts by lynback58 →
This entry was posted in About the Author, Day One: Walking the Dales Way, Travel Diaries. Bookmark the permalink.